Are you looking for ideas for a Scottish themed wedding seating chart?  Scott's Garden is a vintage design that incorporates the thistle.  What is the meaning of the thistle in Scottish heritage?  The legend of the thistle it that a sleeping party of Scots warriors were saved from attack by an invading Norse army when one of the ambushers stepped on a thistle with his bare feet. His loud cries raised the alarm and the roused Scots duly defeated the invaders.  There is no historical evidence for this "Scottish yarn", but Scots, like other nations, love a good story.  The Scott's garden design can be customized and used on an entire suite of products for your Scottish themed wedding or special event. 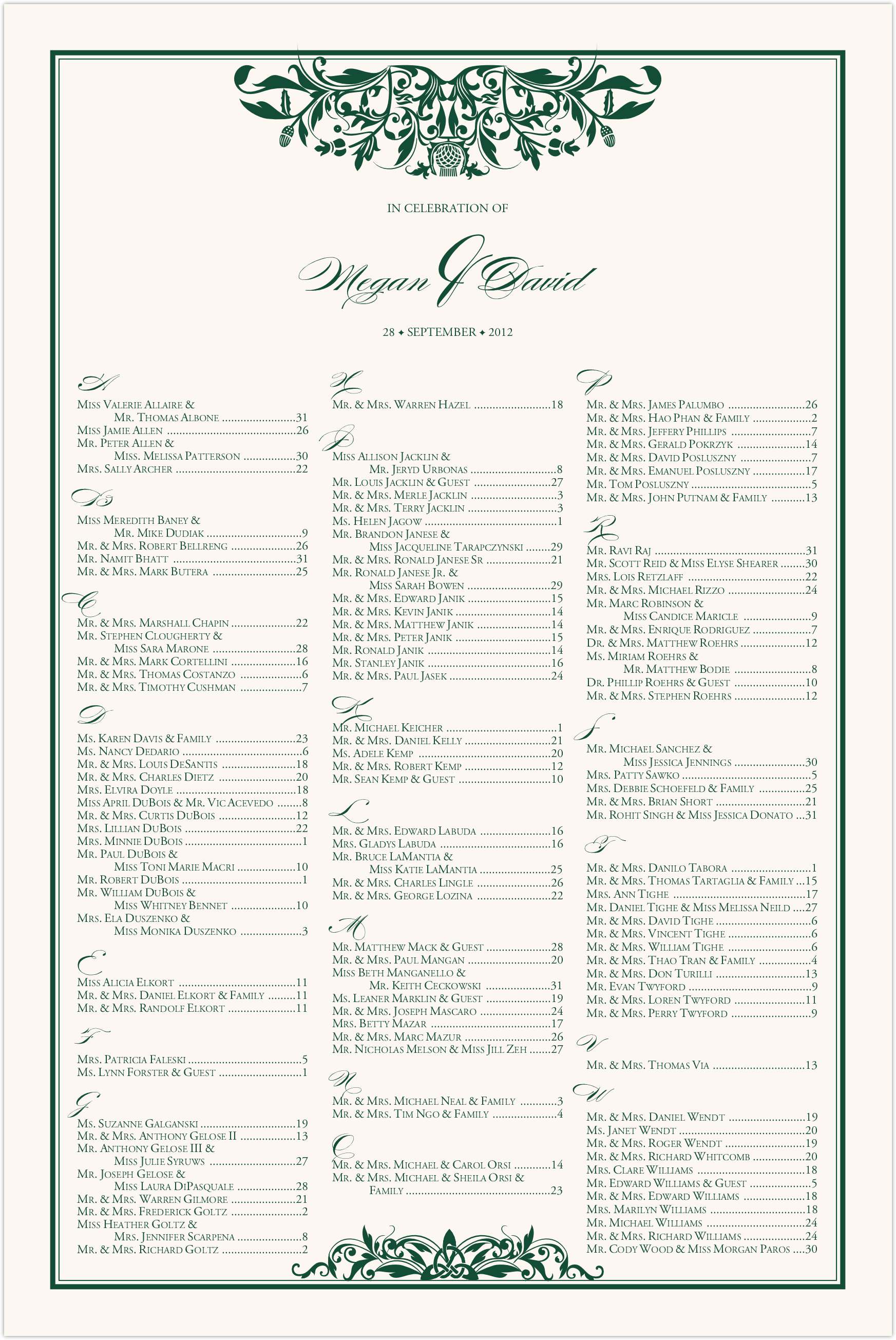 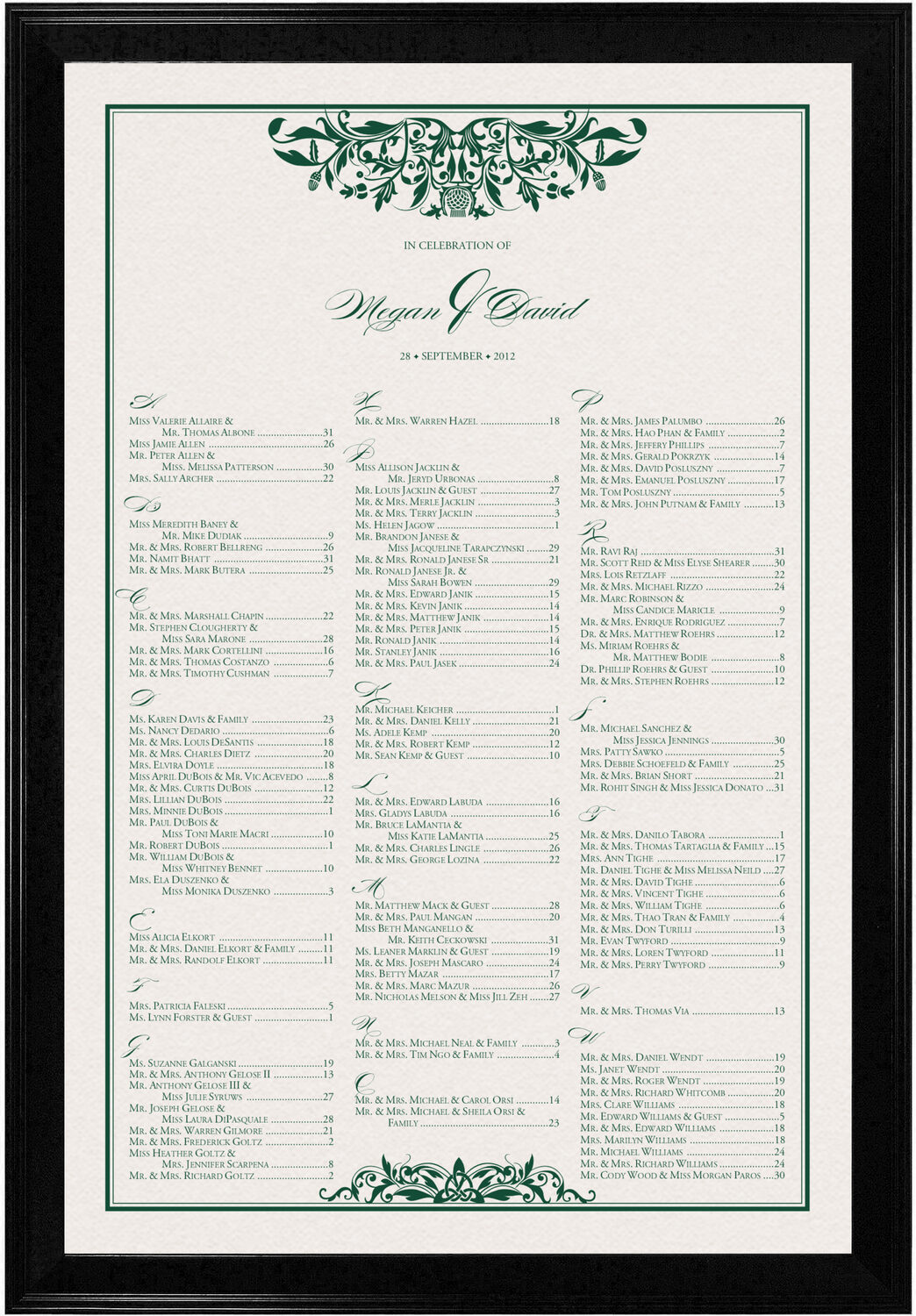 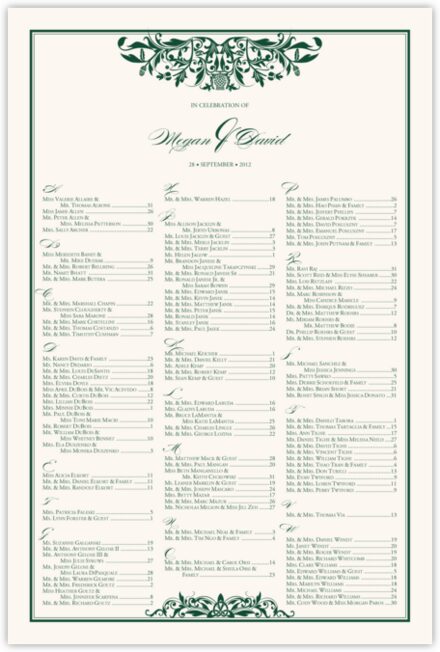 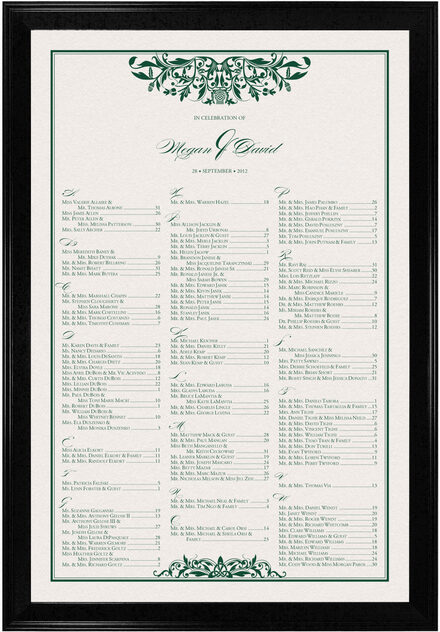 'Scott's Garden Seating Charts' has been added to your cart 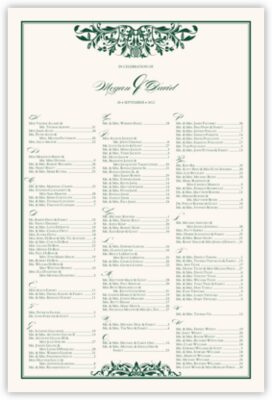 Check any items below that you would also like to see a matching proof of - free of charge!

We also have these great matching designs 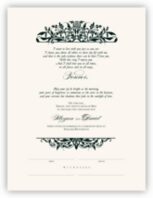 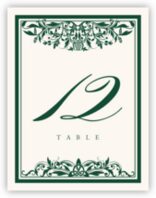 You haven't saved any illustrations to My Ideabook. Please browse our Artwork section to find your favorites.

You haven't saved any flourishes to My Ideabook. Please browse our Dividers, Vignettes, and Flourishes section to find your favorites.

You haven't saved any monograms to My Ideabook. Please browse our Monograms section to find your favorites. 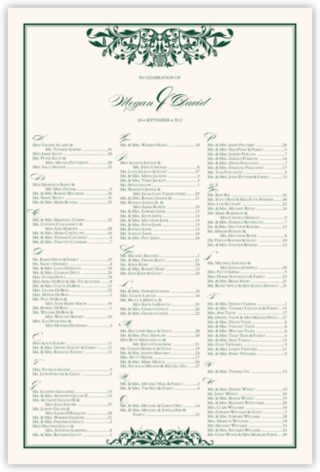 1. Browse our designs, and don't worry - Everything is 100% customizable

We have thousands of designs to choose from! Simply browse our website and try to find the design that is closest to what you're looking for. If you have any design changes, you may simply indicate them on the order form. Add the product to your cart, and select any other products that you would like to see a matching proof of.

2. Checkout to receive your free proofs, with no obligations

After finding the perfect design, complete the free, obligation-free, checkout process to submit your order and we'll get working on creating a proof for you right away.

3. Proofs will be designed and emailed within a business day

Check your email often because we will be sending a full color, digital proof within a day. You can review it, and if you have any changes, we'd be more than happy to make them. From start to finish, we'll go through 2-4 proofs on average over the course of a few days.

4. Approve the proofs, submit your payment, and wait for your package

Once you're completely satisfied with your proofs, you can then submit your payment and we'll ship your order out within 1-2 days. As always, orders over $100 will be shipped absolutely free.

Paper Colors If selecting a darker paper color other than Pearl White or Champagne, it is highly recommended that all text or designs be in dark color.
White 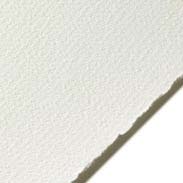 Add the wedding party to the upper left and right corners of the seating chart.

About Our PapersAt Documents and Designs, we use some of the finest papers we have found for your special event needs. 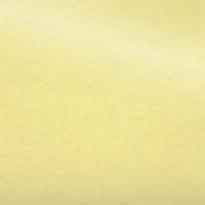 SHINE Shimmering Metallics (92#-107# Cover)…
…from Reich Papers in Italy is used on all of our products with the exception of Seating Charts and Certificates (see below). It features a luminous, pearlescent, eye-catching shimmer that will captivate your guests. With weights ranging from 92# to 107# Cover (as noted), there will be no "bleed-through" of the inks from front-to-back, and no issues with the paper standing on its own for our tented products.
Read more about SHINE at Reich Paper's website here. 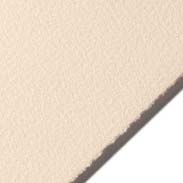 Somerset® Textured (300gsm, ~140# Cover)…
…from St. Cuthbert's Mill in England is the paper use on our Seating Charts and Certificates. It is an extremely heavy-weight (300gsm), 100% cotton watercolor paper, featuring a slight texture. Furthermore, the paper is acid-free and archival, meaning it will last for hundreds of years and won't discolour or fall apart (in proper conditions).
Read more about Somerset® Printmaking Paper here.