Celtic Symbols of Ireland and Scotland can be used to express your Irish or Scottish pride at your Celtic themed wedding or hand fasting ceremony.

The word Celtic or Celt is in reference to the cultural and geographical group of people known as the Celts. Today we generally think of Celtic as a wide reference to Irish or Scottish culture and traditions. Within these traditions there are many symbols. Many of them have rich stories behind them and others have meanings unknown. Surprisingly, a majority of the traditions the Celts celebrated for their weddings have found their way into other cultures, and even Pagan Celtic traditions were transformed into Christian Celtic traditions. Even certain expressions such as "tying the knot" were derived from the Celtic wedding ceremony.

There are at least three easily identifiable Celtic symbols that are commonly used in Celtic weddings: the Claddagh, the Celtic Cross and the Celtic Knot (including the Triquetra or Trinity Knot).

Although this symbol (or rather combination of 3 symbols) can be seen all over the world, and each piece of the claddagh has a universally understood meaning, the story behind how this design was made is not known by many. There are of course many different versions of the story and there are other stories that are a bit more fanciful, but the most likely history of its creation is as follows:

In the early 16th century, a week before he was to be married, an Irish fisher named Richard Joyce was fishing off the coast of Galway. While at sea, his ship was captured by pirates and he was taken to West Africa and sold into slavery to a Moorish goldsmith. Under captivity, Richard worked as a goldsmith for this man for years and became very adept at the craft. After several years passed, Richard was released (due to British rule) by his captor. However, his owner was so impressed with Richard's work that he offered Richard his daughter in marriage as well as half of his wealth if he would stay. Richard refused and returned to Ireland to find the girl whom he was to marry. Upon returning to Ireland, Richard found his fiancé still unmarried and waiting for his return. To show his love and respect for her, he forged the claddagh ring with three symbols. The first symbol what that of hands, which signified friendship. The hands held a heart, which signified love. The heart was topped with a crown, which signified loyalty. Richard gave the ring to the woman he loved, married her and they settled in the village of Claddagh (hence the name). Although the village no longer exists, the claddagh's significance has not diminished. It is now worn as a sign of love, loyalty and friendship. 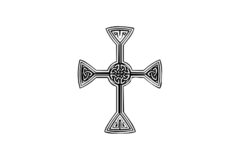 Predating Christianity, the Celtic cross is a symbol that combines a cross with a ring surrounding the intersection. A standing Celtic cross, made of stone and often richly ornamented, is called a high cross or Irish Cross. The most famous standing crosses are the Cross of Kells found in County Meath, Ireland; the Ardboe Auld Cross in Ardboe, County Tyrone, Northern Ireland; the crosses at Monasterboice, County Louth, Ireland; and the Cross of the Scriptures, Clonmacnoise, Ireland.

In Celtic regions of Ireland and later in Great Britain, many free-standing upright crosses were erected by Irish monks, beginning at least as early as the 7th century. Some of these crosses bear inscriptions in runes. In Ireland, it is a popular myth that the Celtic cross was introduced by Saint Patrick or possibly Saint Declan during his time converting the pagan Irish. It is believed that Saint Patrick combined the symbol of Christianity, a cross, with the symbol of the sun (or possibly the moon), to give pagan followers an idea of the importance of the cross by linking it with the idea of the life-giving properties of the sun.

It is thought that the reason the Celts used intricate geometric patterns to decorate is because their religion forbade them from using images depicting the creator's works, namely animals, plants and humans. Although there are many interpretations of what these complex bindings mean, there are no documented sources stating their purpose. Some scholars feel that they are simply a way in which the Celts chose to express themselves artistically given the boundaries they put on themselves through their religion. Others feel that the unending knot designs stand for unending love, while some symbols carry even more specific ideologies.

The Trinity Knot or Triquetra has represented several different religious beliefs throughout Celtic history. This widely recognized knot has been used for the past two centuries as a sign of special things and persons that are threefold, such as Mother, Daughter and Grandmother - Past, Present and Future - and more notably in the Christian philosophy as the Holy Trinity; the Father, Son and Holy Spirit.

As for the intricate knots you will see adorning many Celtic constructions or books, there is a relative set of patterns that are generally composed of between one and four separate bands intertwined into one unending knot design. 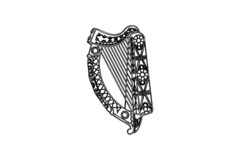 The harp is a revered symbol of Ireland, and has been since ancient times. Harpists in Ireland enjoyed high social status in Ireland until its decline in popularity in the nineteenth century. When the English ruled Ireland, they burned harps and executed harpists in an effort to curb Irish nationalism. In the early 1920s, the Irish Free State brought upon a resurgence in the use of the harp as a symbol of national unity when it used the harp as its official seal. Today, the harp is found throughout Ireland on government offices and other state organizations and banks. 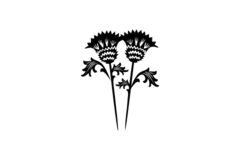 According to Irish folklore, an invading army from Norway was attempting to sneak up on a a Scottish army's encampment during the night. A barefoot Norseman suddenly cried out in pain after having the misfortune of stepping on a thistle, alerting Scots to the presence of the Norse invaders.

The thistle is thus an ancient Celtic symbol symbolizing the wounding or provocation of a thistle yields punishment, as well as of nobility of character as well as of birth. The thistle has been the national emblem of Scotland since the thirteenth century.

Welcome to Documents and Designs!

Your exclusive 20% off discount code is

This coupon has been applied to your cart and will also be emailed to you.

We hope to work with you to make your wedding or special event special, and if you have any questions, we hope you contact us.